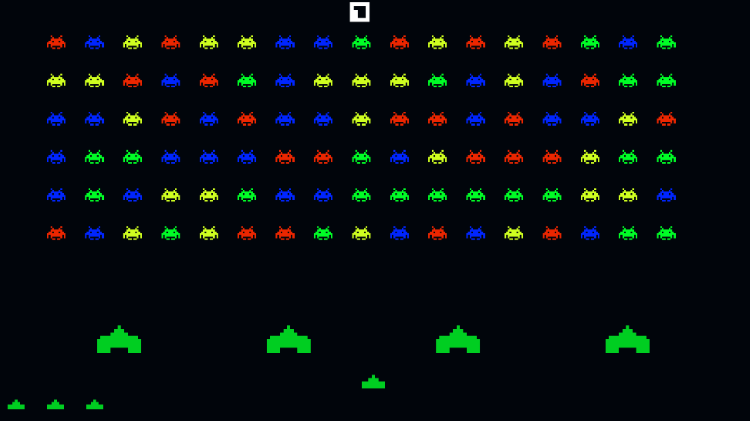 Candy Invaders was a game made to show all my programming skills.

How it was made

The game is split in two parts, the game part and the menu part.

The game is composed of a game manager, which handles all the other manager. Every notification to the game pass through here, one ship disappeared? Tell the manager. Player pressed the shooting button? Ask the manager for a bullet. The manager has a Pool Manager and a Sound Manager which has all the sounds that the game can play.

The game manager has the most important part of all, a public static float called DeltaTime which every moving script calls instead of the Time.DeltaTime. The reason of this is simple, sometimes the game must be paused, but not the Invokes, Coroutines or anything that use unity’s time as a reference, so instead I provide my own delta time. An example of this is, when the game is over, it shows a lost screen and cancel the DeltaTime every script use, but use a Invoke to restart the game, so it pause everything it depends on it, but not Unity. The Game Manager also is the one who communicates between the scripts, adding score, resetting the game (there is an interface called IReset which it’s Respawn function is called to reset the gameObject withouth reloading the scene) or returning a script it was asked for.

The sound manager main function is to store the sounds of the game, every time a gameobject wants to play a sound, it shall be asked to the gamemanager, which will take the sound file from it’s sound manager and sent it to the player.

The pool manager works like the sound manager, a gameobject must be asked to the GameManager, either by asking by the prefab’s name or the prefab’s object. The pool manager then find a copy inactive of that object and sends it to the script asking for it. ###O ther elements

The grid system was a tricky part, the user can set how many rows and columns he desire, with the distant between each item, and the grid will show in real time where the elements will spawn. This is the gizmos function:

Every time it moves, the grid is also checking how many elements are active, and change the movement pause accordly (when there are less ship active it takes shorter pauses).

Another element that the grid has is the chain destruction, each ship setups a random color which it saves in itself. When an element is destroyed it call all its adjacent elements and check if they belong to the same color, if so, it destroy them and add the combo multiplier to the score that it’s going to give to the game manager.

The main menu is an asset in which I’m currently working, so I decided to use it. It has a main scene which all the inputs are loaded, and it instantiates enough all the corresponding buttons for loading a scene, quitting the game and making custom behavior. It’s extremely customizable, every button can have a different color and different action.

This asset also brings a pause menu which use the inputs loaded from the Main Menu Scene, so if this asset is used without passing through the other scene it may not work. It simply pause the game setting Unity’s Time Scale to 0. It have two buttons, one for continuing the game and another to go back to the main menu’s scene.